Zombie units are a gathered crowd of zombies that are especially dangerous. Normal missions cannot be done in buildings occupied by zombie units. You can send soldiers to kill zombie units and this usually keeps them from moving. Demolitions can also take care of them. 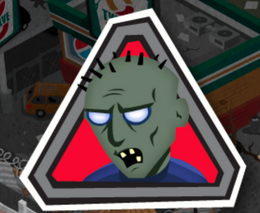 When enough(5+) zombies crowd into one building directly beside your fort, they might turn into a massed zombie unit. This basic unit stays in place for several days or longer, during which they actually pose no threat at all. The number of zombies on the building will keep increasing, so it gets more dangerous every day and will take more defense to keep them at bay. Researching fort silence can decrease the amount and strength of massed zombies. Killing zombies before they get massed is also a good idea.

If the power of a massed zombie unit is reduced to zero by a zombie trap, it will continue to exist, block missions in that building and can even attack your fort. They do not actually pose any danger though and any survivor can be sent to "kill zero massed zombies" without any danger.

Zombie mobs are slightly different from massed zombies as they definitely appear at least two squares away from the fort, advance towards fort one square each day and will attack the fort on the last day. Fortify the building beforehand and gather your soldiers to withstand the attack. Zombie mobs can move on the edge of the map but not on water bodies. They will also attack any other factions that stands in their way, and will continue to advance afterwards. Their attack strength are usually higher than regular massed zombies. It appears that only one mob can exist on map at a time. Baits attract a zombie mob and this can be used to do heavy damage to other Factions without angering them.

Roaming zombies appear in late game when an considerable portion of city have been reclaimed. (Does not appear before campaign city Spokane.) They do not attack forts, instead, they seek out nearby survivors who are doing missions and move closer to attack them. Survivors attacked by Roamers will be forced to leave their mission, and sometimes get injured or killed. Baits attract Roamers.