From Rebuild: Gangs of Deadsville Wiki
Jump to: navigation, search

Factions were added to the game in version 0.44.

Factions are other forts in the same city with you run by other groups like yours. You can befriend and trade with them, or go to war. There are 12 factions that you might meet, and each one has a different personality. 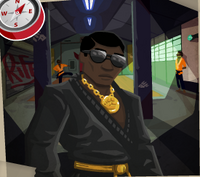 A badass gang of imposing karate dudes with mirrored shades. They value discipline, have a strict code of ethics and take a little too much joy in killing zombies with katanas and well-placed roundhouse kicks. You can hire them as mercenaries once you prove your honor. They are a reference to the Gramercy Riffs from 70's cult movie The Warriors and were featured in Rebuild 2. 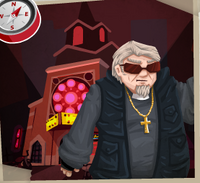 Also from Rebuild 2, these guys are just the opposite of the Riffs, and the two are always at eachother's throats. The Judgment are a good old fashioned Hells Angels type biker gang, except... they dress like catholic priests. They're all fire-and-brimstone and set to cleanse the world of zombie and human alike. If you're alive, you're probably a sinner, and that's all the excuse they need to roll in and raid your fort.

Sure, you can try to ally with them, even if it's difficult, since your relationship with them starts out very bad, but if you can ally or can reach a relationship usually over 50%, they start to stop sending out bad guys to attack. and steal certain resources or equipment and start sending merchants selling various weapons, and if you have good ammunition production, partnering with them to buy weapons can be a good option. 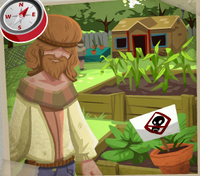 The Luddites, and his organic farm botany. The leader "King" Ludd Owen that is present

Part hippie, part luddite, these vegan farmers live off the land, and are so much happier now that civilization has collapsed and they can take off their tinfoil hats: there are no more radio, tv and wifi waves flying around to cook their brains or control their thoughts anymore. You'll clash with these guys if you're truly intent on bringing back the evils of technology. They are a reference to Ned Ludd and the Luddites who fought against industrialization in the late 1800s -- their name has become a pejorative term for someone opposed to technology.

Church of the Chosen Ones 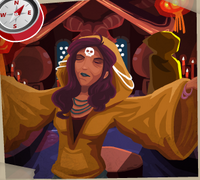 Cassandra Starr inside her meditation room

Another callback to Rebuild 2/Mobile, this zombie-worshiping cult have formed their own fort in this game. You could say they're a little eccentric but mostly harmless... or are they? If their infectious new religion takes root among your own survivors, watch out – because the ultimate goal of any Church follower is to join the "Chosen Ones" and become a zombie themselves. 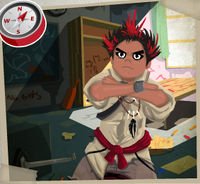 Rufus at his classroom destroyed and disorderly

Still living in their former boarding school, this gang of kids is lead by 15 year old Rufus who is the oldest of them because he was held back a year for bad behavior. But it's not quite Lord of the Flies over there yet, and they get by on their ability to sneak, hide and steal. 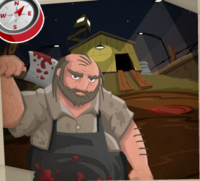 Avid meat merchants, they've got all these cuts of pork to trade at surprisingly good prices. Well, that is kind of a funny color for pork, and it does taste a little odd, but hey, beggars can't be choosers, right? They really don't like people snooping around their pig farm and will shoot at anybody who gets too close. Do they just value their privacy, or are they hiding something? 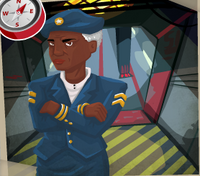 The secret government base (which is under a Power Plant). Senator Davis is responsible for directing her last government system

These bureaucrats are the last remnants of the actual local government. They claim to have contact with a central organization via a secret government network, and are under orders to regain control of the area and will mercilessly commandeer any supplies they need to do that. Senator Davis is a possible reference to Frank Marshall Davis 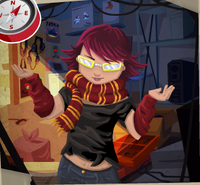 Dara Yu, aka "The Cryptico" inside her room

These gamers had gathered together for an epic LAN party on the night the zombie infection reached their town. They didn't even notice the dead roaming the streets outside until the Internet finally went down. Now they quest to get back online.

They are better at scavenging than combat, although their base is better defended than most with electric fences, security cameras and motion sensing traps. They trade scavenged equipment and tech to buy fuel for their generators.

Leader Dara is a smart, spunky and opinionated young former programmer, and sometimes a bit of a troll. But when it comes to surviving a zombie attack she's all talk. Years of playing FPSes has not translated to real world gun skills.

Resource given after allied: Fuel 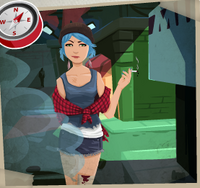 Tiff is not a leader but knows how to handle this place, before a group of addicts and anarchist

An anarchistic faction of former drug dealers and misfits and petty criminals. They produce and sell a drug called "bath salts" that increases combat efficiency and happiness at a cost of long-term addiction and withdrawal.

They are a borderline "good" faction, like they're decent people deep down but they see the world as "us vs them" after being marginalized by society for so long. They feel like everyone's out to get them and as anarchists they hate the idea of being dominated by another group. They either don't think about the consequences of getting people hooked on bath salts, or they believe everyone has the freedom to choose.

Leaders Tiff and Therion (never apart) are standoffish and suspicious of others at first, but helpful allies once you get to know them. They weren't always drug dealers. They had real careers and were friendlier people once, but a horrible tragedy made them brooding and distrustful.

Resource given after allied: Medicine 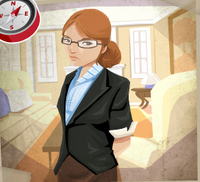 Nell McClung and her wealthy house, was usually book club meeting that brings together her friends in their neighborly

These women have had enough of a male-dominated society putting them in second place, and don't think you need "superior upper body strength" to kill zombies or do what it takes to survive. Tired of being told to stay safe at home and do the laundry, they've got big plans for a brave new world.

Their name is apparently an acronym for Dogwood Acres Helpful Ladies In Action Society, which is why sometimes their name is in all capitals. Some events hint that they were started by the widows of organized crime bosses. 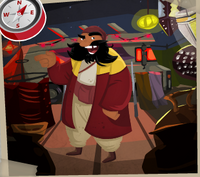 Gustav with his RV and merchandise

A one-man faction with no fort to call home, Gustav is a nomadic trader who travels from city to city, and fort to fort with his caravan, selling goods and the occasional "special"' service. He has a Ukrainian accent. Beware of his mercenaries if you choose to cross him. Trade with him often enough and he will let you buy from his "Special" stocks. 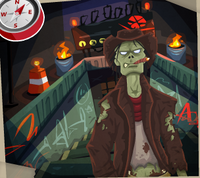 Jesse and refuge for the Rotten, almost no one knows who is in the Subway

Not all zombies are alike; in fact some of them manage to keep their wits about them, more or less. Unfortunately they still look and smell like rotting corpses, so most of them get shot on sight by humans. But a few have moved underground and are living a marginal life, hoping someday to find a cure for their illness.

These guys are like the lead zombie from Romero's Land of the Dead. They're brain damaged and some can barely talk but the disease didn't totally liquefy their prefrontal cortex like the other zombies. The Rotten must have some immunity but it didn't kick in right away. They can still think if they try really really really hard. They are very ill people who spend most of their energy trying to suppress the intense lizard-brain emotions telling them to kill you. But brains are flexible, and as with stroke victims, these zombies (*ahem* I mean people) can work hard to gradually regain more of their previous functions.

The Rotten are fierce fighters who don't feel pain. They are hard to befriend, but won't attack unless provoked and mostly they want to be left alone.

The Rotten start out with a single square, which you first discover while scouting, and must do a mission to make contact. Rotten don't spawn Raiders, Soldiers, or Traders unless they somehow gain additional squares (e.g. via "hand over" actions, or other means).